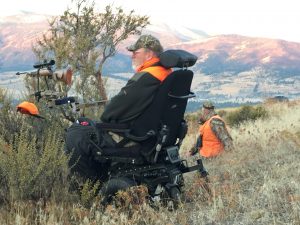 In 2005 my brother-in-law asked me to deer hunt with him.  Over these last 14 years, I have developed a love for being outdoors and enjoying the challenge of the shooting sports.  However, at the same time my life-long, progressive nerve disease made me too weak to shoulder a rifle, pull the trigger, or absorb the recoil.  Even though I retired at age 52 on disability from my career as an IT Project Manager, I have continued enjoying the outdoors with the help of Silent Ability and Capable Partners.

In October of 2018, four of us were invited to go hunting with a friend at his ranch in Montana just south of Lolo and nestled between the Sapphire Mountains and the Bitterroot Mountains.  We had met him at the Capable Partners banquet in March.  We hoped to get mule deer bucks, trophy whitetail, or maybe even a big bull elk.  However, I didn’t have an elk rifle.  I contacted Pat Moore at Silent Ability to get recoil relief modifications and a bite trigger for my rifle. 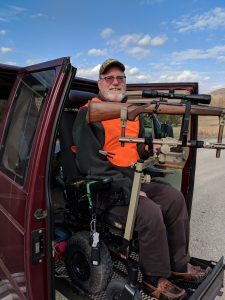 I didn’t have a large caliber rifle suitable for elk for this trip that may be the only time I will be able to go hunting out west. With the goals of getting an accurate rifle, being as independent as possible and a larger caliber, I settled on a used Winchester Model 70 in .30-06.  It is a highly accurate bolt-action with a wing safety that even my weak hands can operate.  Pat sent me to Jon Fettig at Engineered Silence to modify my rifle.

Jon made the modifications but the federal paperwork didn’t come through in time for me to take the suppressor with me.  Even the muzzle brake he put on my rifle helps lessen recoil. The first time I practiced with my rifle, I couldn’t hit the paper target at 50 yards.  The last time I went to practice before going to Montana, I shot a 1.5” group at 100 yards.  I was ready to hunt mule deer and elk. 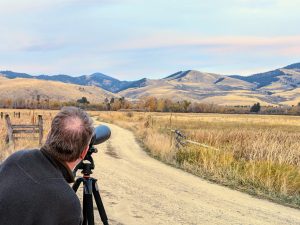 Our new friend Mark Reiling had bought his 3,200 acre ranch about 10 years ago and decided to open it up to physically-challenged hunters.  He built a couple of accessible waterfowl blinds and he worked with an elevated blind manufacturer to have two wheelchair accessible deer/elk blinds available.  He has had physically challenged hunters going after a wide variety of prey on his land.

In mid-October, my friend Bob Lindig and I left Minneapolis on the two day drive to Lolo, Montana.  We arrived safely and saw mule deer and hundreds of elk on the ranch the next day.  Mild temperatures, our hosts’ hospitality and the rugged western terrain welcomed us on our two week hunting adventure.   We fished for trout and scouted the ranch in preparation for Saturday’s opener.  It was legal for me to take either a cow elk or a brow-tined antlered bull.  I had five spike bulls in my scope at 150 yards and could have taken any one of them but they were not legal.

Bob got a nice mule deer buck on Monday.  On Thursday, we focused on getting me a mule deer buck.  I saw some does and suggested I sit there and wait for a good buck to show up.  That’s what a whitetail hunter would do.  Mark encouraged me to keep moving until we found a good buck.  A couple hours before the end of legal shooting time, as we neared our turnaround point, we spotted two bucks fighting on a hill about 600 yards away.  I was riding in a side-by-side ATV with my rifle mounted and sticking through where the windshield had been. 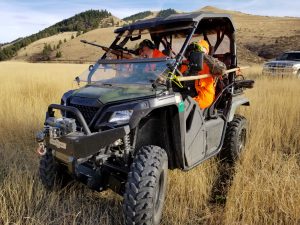 We crossed 400 yards of grass field with the deer on the hill watching us.  We stopped and I aimed at the bucks.  My driver told me the right-hand buck was bigger – a 5 by 4.  “Yes, it’s a good deer to take”, he said as he closed the bolt on my rifle.  200 yards.  I flipped off the safety and put the bite trigger in my mouth.  I slowly aimed while controlling my breath.  “High shoulder” he said.  “Ready”, I mumbled around the bite trigger.

The deer stood still after my shot for a second, but then lurched forward for ten yards, wheeled and turned back to the right for ten yards.  It stumbled, fell, slid, and rolled down the hill about half the distance to the bottom.  Due to the amount of preparation my rifle had allowed, the shot was well-placed for a quick kill. 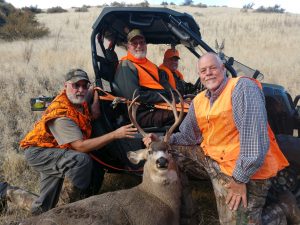 The modified rifle had done its job. The recoil didn’t hurt and I didn’t flinch as I was shooting.  I had taken a big mule deer because the modifications allowed me to practice with a high caliber rifle.  A lot of things have to come together for me to be successful hunting big game.  I am grateful to Silent Ability because the right (custom) equipment made the trip to take a trophy mule deer possible.  I  am certain when my suppressor paperwork comes through that piece of equipment will allow me to shoot even more accurately and hunt for many years to come despite my physical challenges.