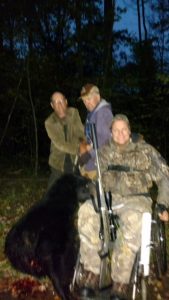 This adventure starts out a long time ago.  The first time I ever tried to harvest a black bear was in 2003. I was at my in-laws’ property in Hibbing, Minnesota.  I was told there were many bears in the area, but unfortunately, we never had a bear sighting between my wife Ann and I. My second attempt at harvesting a black bear would be in 2010 at my parent’s property in Trego, Wisconsin. It took me 5 preference points to receive a bear license or a “tag”. Again, there was plenty of bear in the area, but sadly we didn’t bait properly and never saw a bear. My third attempt would be 2017 in Wisconsin, again and it took me 5 years to draw a bear tag again. Unfortunately, this time my parents had sold the farm to Jack Link’s Jerky to use as hunting property, and had moved back to the Twin Cities.

So, the Spring of 2017 started out by pursuing an opportunity to hunt bear on a Wisconsin property set up with a bait site or two for the Fall. I was fortunate to have a good friend, Dick Anderson, who had the property and was willing to bait.  I had met Dick 14 years ago through Capable Partners, an organization based in Minneapolis, Minnesota. Capable Partners takes physically challenged people out hunting, fishing, as well as other related opportunities. Dick no longer lives in the Twin Cities, but has moved up to Hayward, Wisconsin.  Dick was so pumped up for the opportunity to help me harvest a Black Bear!

Wisconsin alternates their first part of the bear season every year. This year the dog hunters would go the first six days. I was a little concerned the bears would be all riled up after the first week of being chased by dogs, but Dick reassured me the area that I’d be hunting did not give anyone permission to run dogs.

Planning the trip would be difficult, my bear season started September 13th through October 10th.  It seemed to be feast or famine on hunting opportunities.  Earlier that year I had drawn elk and antelope tags for the state of Wyoming.  That season started September 15th, and my good friend, Big Al McCarty, at Chairbound Hunters had me penciled in to start hunting September 16th.  I talked to Dick and was wondering if I should come up and hunt September 13th.  Dick suggested I wait until I returned from my hunt in Wyoming since his daughter’s wedding was on September 14th.

I arrived back home from my successful elk and antelope hunt on September 23rd. At that time, I thought about possibly hunting a couple days during the week.  Dick had informed me that there was a bumper crop of acorns, and the bears were no longer coming in to the bait.  On September 30th we celebrated the life of my father who had spent 90 years on this earth.  We made plans to hunt the first week of October.  Dick notified me that it had rained 5” in the past 3 days, and it was a swamp where we would be hunting.  So I had to wait a few days to let the area dry out. 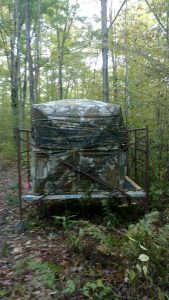 On October 4, my friend, Forrest Wilkinson, was able to drive me to Dick’s house.  We arrived at Dick’s residence at 2:00 p.m. The game plan was to get me out to the blind by 4 p.m., where we could legally hunt until 7:10 p.m.   Dick had trail camera pictures that showed two different boars coming to the bait between 5:00 p.m. and 7:00 p.m.  We drove two vehicles out to the hunting area.  The trail going in had dried out quite a bit, but was still too wet to drive a vehicle on.  Dick made the decision to get me on the back of the four-wheeler rack, and Forrest would hold on to me while we drove out there.  We were within 40 yards from the blind and we stopped.  We decided to put a rope on the front of my manual chair, take the wheelie bars off the chair, and pull me the last 40 yards to the blind.  This would keep the noise down and avoid some mud.  That worked slick; so good that we made the decision that we should just pull me out of the woods instead of going through all the work of loading me on to the four-wheeler.  Dick did an excellent job of setting up the blind on top of some scaffolding 20” off of the ground to get us out of the mud and allow me to see better.  Everything went smoothly lifting me into the blind.

Once in the blind, we proceeded to get set up for the evening hunt. We mounted the shooting rest to my wheelchair and then strapped the Ruger .308 Winchester M77 Gunsite Scout rifle, equipped with an AAC .30 caliber suppressor, onto the shooting rest.  Due to a severe shoulder injury, I cannot tolerate heavy recoil from a high-powered rifle, so the suppressor tames the recoil allowing me to continue to hunt despite my injury.  The next step would be to make sure the elevation was correct on the shooting rest.  Once that was done we loaded it with a 150 grain Barnes bullet.  The bait station was 75 yards away in the form of a cut out log that had cookie dough in it.  It had a heavy granite slated rock and two 10 lb. rocks on top of that.  Dick explained to me that the bears made it look easy to slide the heavy granite slate off the stump with their paws.

We sat there with a lot of anticipation of seeing a bear.  Unfortunately, the bears decided not to cooperate.  We did have a little visitor, a beautiful spruce grouse, which is rare to see.  We also heard two great horned owls and a pack of coyotes.  We left the blind at 7:40 p.m. and Dick checked the trail cameras the next afternoon, there was a bear at the bait from 7:53 p.m. to 8:45 p.m.   Really!  Just missed him!  How ironic to think there was a bear on the bait listening to our conversation at the vehicles while we loaded up!  We went back to Dick’s house and made a plan to get up at 3:30 a.m. and hopefully be out at the blind at 5:00 a.m.  Legal shooting time was at 6:45 a.m.  We sat there watching a gorgeous sunrise and listening to the woods come alive.  We sat there until 9:00 a.m.  The only sighting was a red squirrel.  Everybody was a little tired from the lack of sleep, so we decided to go back to Dick’s house at 11:00 a.m. for breakfast and to take a nap.  We decided to meet up at 3:00 p.m. to get back out to the blind by 4:00 p.m. for the evening hunt. 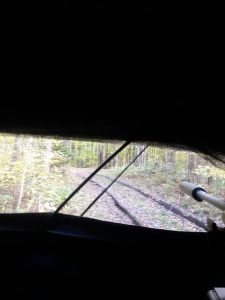 As we settled into the blind, all we could do is listen and watch for movement.  At times Dick was looking over to the north like he was hearing or seeing something, but he never tapped me on my shoulder to signal a bear coming.  Eventually Dick tapped me on the shoulder and said, “Prime time!”  This is when you have the most activity at the bait site.

It couldn’t have been more than 10 to 15 minutes and something caught my eye from the left.  I can’t believe it!  A beautiful black bear was walking at a fairly good pace toward the bait sight. After he proceeded to walk past the bait, he laid down behind some brush.  I was unable to see him anymore.  Fortunately, he only stayed there for about 15 to 20 seconds.  As he got up, he walked perfectly broadside to us.  I put the crosshairs on him, took a deep breath and bit down gradually on my bite trigger.  As I heard the sound of the gun go off I watched through my scope and I could see I had made a nice shot on the bear.  We could hear the bear running through the woods.  I’ve been told that the bears give out a loud moan at the end of their life, but we never heard that moan.  Since there was only an hour of light left in the day, Dick was eager to go check for blood, but before he did that, he called the guys that were 20 minutes away to come and help.  It didn’t take long for Dick to find blood about 20 yards from the shot.  Because of the heavy underbrush, Dick found it very hard to look for the bear.  Every stump seemed to look like a bear.  He made the decision to wait for the other guys.  Dick and Helmut went to track the bear together, and Forrest stayed with me.  It didn’t take long before we heard them hollering, “We found it!”

I was so elated, I had this huge adrenaline rush go through my body.  Finally, after my third attempt to hunt bear, I was so thankful to harvest this beautiful black bear.  Everyone met at the blind to do high-fives and congratulate me.  They also made a game plan of how to get the bear out of the thick brush.  The guys were fortunate enough to pick their way through the woods with the 4-wheeler to where the bear laid.  It didn’t take long for them to field dress it and load it up.  I think there was a little adrenaline rush going through everyone.  I finally was able put my eyes on my first black bear.  How exciting it was!  A beautiful Wisconsin black bear.  I couldn’t have been more excited!  As the daylight was leaving us, we packed up and proceeded to go out to the vehicles.  But before we loaded the bear into the truck, we took some pictures on the logging road.  After we arrived at Dick’s house, they were nice enough to quarter the bear up for me to take home to the butcher the next day. 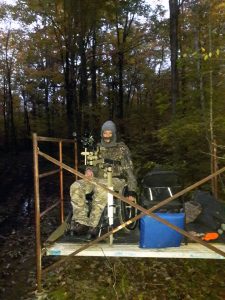 A big thank you goes out to my good friend Dick Anderson for all his hard work to give me the opportunity to harvest my first black bear!!  I want to thank Forrest and Helmut too for all of their hard work and help. I’d like to thank Pat and Ruth Moore at Silent Ability for talking me into trying Pat’s suppressed .308 Winchester. They convinced me to not give up on my dream of going on this incredible hunting adventure, despite the recent passing of my father.  Also, Jon Fettig at Engineered Silence LLC, for helping me obtain the gun, mounted scope, and installing the bite trigger and suppressor.  It was a great team effort! Without everyone’s help, this would not have been possible. Thanks again, everyone, for all the awesome memories!!!